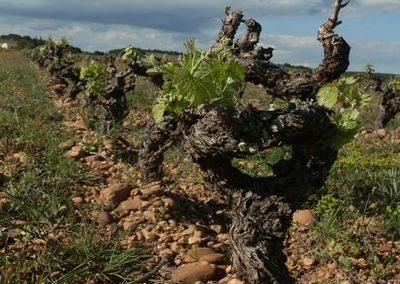 Great grapes, so that the talent of the winemaker expresses itself ...

In red and rosé: syrah, grenache, cinsault, carignan and mourvèdre also called the plan of Saint-Gilles.

The number of grape varieties, combined with the multiplication of the number of parcels, the differences of soils and a parcel vinification, offers us a possibility of combinations of assemblages justifying the richness and the depth of our range of wines.

Our vines are on average 30 years old (more than 90 years for the oldest), and nearly 15 hectares are harvested by hand.

Tillage for a terroir that is revealed

The young vines are preserved by plowing and the grapes are "green" so as to favor a deep and fast rooting.

The oldest are grassed and plowed on the row only, to control yields.

The use of insecticides is prohibited by the "sexual confusion", the treatments of the vineyard are reduced to copper and sulfur in small doses: the Mistral is our ally ...